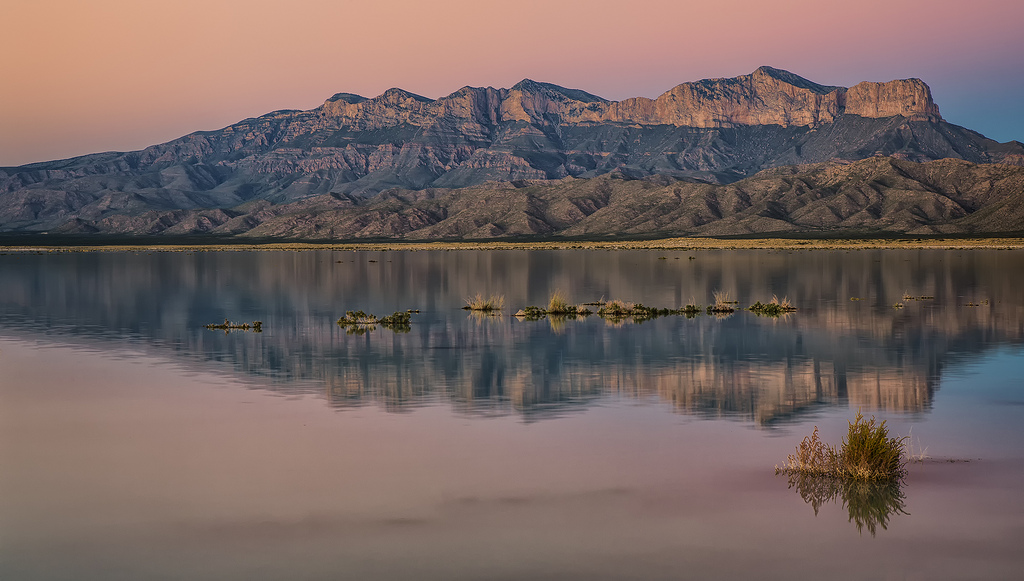 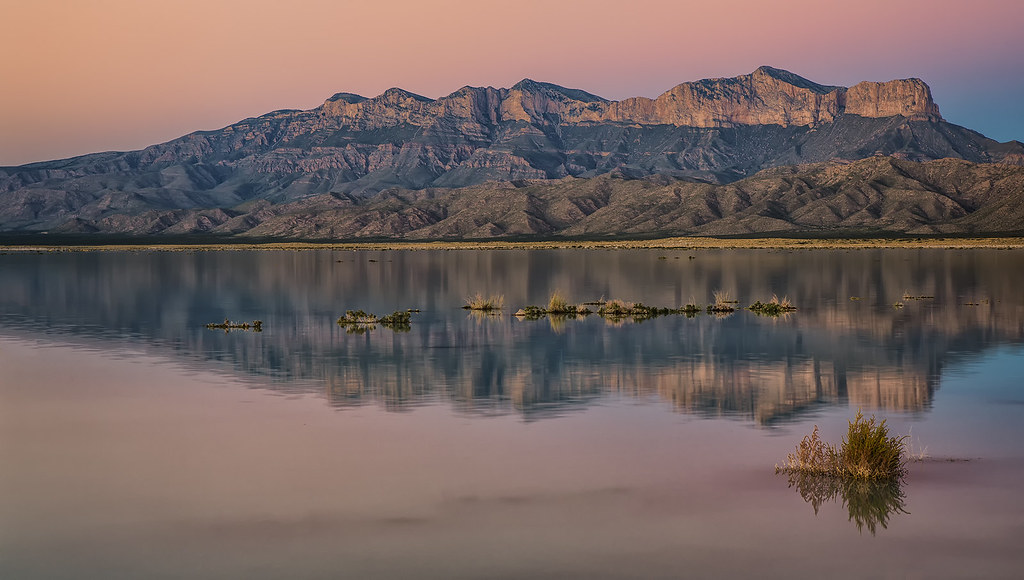 The rains this fall were unusually heavy. We all heard about the flooding in the Front Range near Boulder, Colorado but that system also caused heavy rains further south in Texas. I could not visit Guadalupe Mountains National park last fall because over 90% of the trails were closed by flood damage. The park received 17 inches of rain over a 48 hour period. One of the effects of that much rain over that short period is that the normally dry salt playas were filled with the run-off. I had never seen this before but they say it happens every 15-20 years. By day, the winds are strong here, stirring up the playa bottom turning the temporary lake a beautiful shade of turquoise. After the sun goes down however, the winds almost stop and the lake calms very quickly due to its shallow depth. The calm surface allows this reflection to form.

Notable peaks in this refection and scene are El Capitan on the right and Guadalupe peak just to its left. Guadalupe peak is the highest point in Texas.

This reflection is also very special because it shows one of the best examples of a preserved Permian age reef and cratonic basin fill sequence in the world.

The lower dark sloping material is the basin fill. The lower parts of it are siliciclastic muds that have turned into shales and a punctuated with flat stringers of siltstones and fine grained sandstones. The basin was filled in from left to right and eventually a major sandstone layer prograded into the basin and is called the Brushy Canyon formation. It is considered to be a turbidite which is a kind of underwater avalanche where the sediments sweep out into deeper water. The basin slowly became more arid and switched from siliciclastic to carbonate deposition with first carbonate muds then an entire reef sequence. The reef built from left to right also and is the capping blocky cliff forming unit.

If you look carefully at the reef unit, you can see the progradation scars as it built out and up into the basin in the same way that coral reefs do today. The progradation scars are the curved lines that start out steep near the top of the cliff and then sweep down turning almost horizontal as they merge with each of the right at the darker vegetated line at the base of the cliff. It is a fabulous example of how a reef forms.

The Permian section also has a lot of gypsum in it and these rains will dissolve some of it and carry it into the playa. As the water dries, and it may have already dried up, the dissolved gypsum will form selenite crystals and when these are broken up, they form a white sand that is blown into dunes. White Sands in New Mexico is the most famous example of this but you can find gypsum dunes on the north shore of this playa and these dunes will soon be replenished with more broken selenite crystal sand.

I took this on my way back from the New Mexico Geological Society Fall Field Conference and getting to see this took away a little of the sting of the park closure.